Bella Knox Response 1: How much does college really cost? 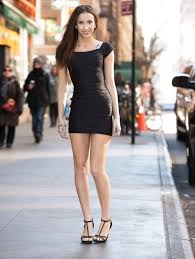 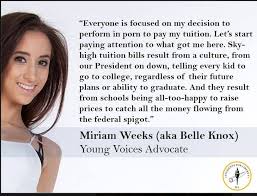 The Curious Case of Bella Knox

In case you haven’t heard Ms. Miriam Weeks a.k.a. Bella Knox is the infamous freshman now sophomore at Duke University who resorted to porn to pay for her obscenely expensive education. She was found out and unlike some of her contemporaries instead of cracking tragically under the pressure, she embraced the spotlight and skyrocketed her career and obtained celebrity status. Now Duke has retracted her financial aid because she makes too much money. She responded by writing a well thought out letter on how the education system is flawed and puts students in insurmountable debt that burdens the entire country.  (http://time.com/2873280/duke-porn-star-belle-knox-college-cost/) Her argument is well structured and she has obviously put a fair amount of thought into her argument evidenced by not only her words, but also her actions. Nonetheless, her assessment of the American educational system and the debt it create is simply wrong.

I initially spelled out my facts and arguments over 1 blog but it was much too long so I have split it into different parts and how different things affect the way young people grow. This blog will have the boring math.

With an average annual cost of $8,893 to attend a state school you must earn an extra $741 a month. With a minimum wage job that in most states is around $7.25 or higher that would mean after taking out about 17% for taxes (most of which you will receive back on refund day) it would take over 120 hours of work just to cover tuition and that does not include your basic living expenses. So if you receive no financial aid from the school or your parents then you would have to take out loans. A Stafford loan allows you to take out a max of $5500 freshman year, $6500 sophomore year, and $7500 any year after. Freshman year still leaves you $3393 on the average tuition bill but you could pay for that working 12 hours more a week at a job that pays minimum wage.  You still have living expense, but from personal experience (keep in mind I lived in College Station, TX where the cost of living is about 13% lower than the national average according to areavibes.com) the most I paid to live was $495/month for rent, $125/utilities (which includes water, cable, internet, and power) and $300/month for food. In college that was living lavishly most of my college career I was living off a third less. So living decently and paying the average tuition bill will take about $20,000/year and if you take out federal and private loans to cover the whole cost so you don’t have to work at all and it takes you 4 years to finish school you will have about $100,000 assuming 8% (which is extremely high) in debt to pay back in 10 years. That cost would be quite ridiculous even if you had a decent job an enormous portion of your check would go back into simply paying for school.

Now some facts, a simple google search of the average cost of colleges shows that the average tuition for public, private and community colleges.  Another fact worth mentioning is that almost always if you go to a school out-of-state they will waive the out-of-state fee as long as you keep your grades up. Furthermore most state schools actively encourage in state students to attend their school by partially subsidizing them with scholarships or other financial aid. If you for some reason receive no financial aid at all then rather than try to work through school or take out an incredible amount of loans you can attend a community college that works closely with the school you want to go to. Almost all state schools have some type of program that partner with students who want to transfer in from a community college.  If you attend a community college the federal loans will completely cover your tuition and some of your living expenses as well. You will still have to work if you have no other financial aid, but assuming you took out the full Stanford loan freshman year you would only have to work 30 hours a week at minimum wage to pay for school and your living. If you weren’t in school you would actually have to work more to have the same standard of living. Once you transferred to a state institution life would be a little harder since you would now have to work 40 hours a week to keep the same standard of living your grades would probably suffer, but with dedication it is possible and I have seen numerous people do well. At the end of the day you would probably have the maximum amount of Stafford Loans available and with current interest rates at 3.86% you would owe around $34,000 payable in 10 years which would cost you about $350/month.